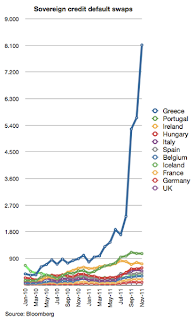 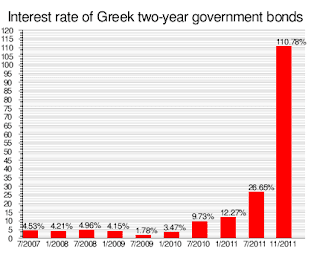 Greece was one of the fastest growing economies in Europe from 2000 to 2007, having achieved an annual growth rate of more than 4%. This was also the time when savings began to grow across Europe and so did the investable funds with banks and public. Coupled with this, a moderate budget deficit of 5-6%, allowed Greece to make greater bond issuances, leading to its public debt rising from 100% in 2005 to 143% in 2010.Greece used higher funds primarily to increase wage and pension rates which are non-development expenditures. During this very time period, global economic turmoil following the sub-prime crisis of 2007-08, led to the decline of Greece’s biggest industries-shipping and tourism with revenues falling by more than 15%. Added to this, Greece manipulated fiscal data in 2010, paying investment banks huge fees, to show lower level of borrowings, so as to continue increased spending while hiding the borrowings from the European Union. With budget deficit and GDP growth rates being revised to 13.6% and -3% in 2010 following the revelation of this manipulation, coupled with a 70% external debt, Greece inevitably faced a downgrade of its bonds’ rating to ‘junk status’. Let us now understand the result of this.

Following the downgrade, borrowing costs for Greece increased and so did the negative sentiments and failure of default of Greece’s debt among the investor community. Yields on 10 year Greece bonds doubled to 23% in a year following the downgrade, while interest rate on 2 year Greek bonds rose to an unbelievable 110% figure in November 2011. The use of Credit Default Swaps (CDS) (an instrument that is used to protect oneself against the risk of default of a loan advanced, or to speculate the failure of a debt instrument) against Greece’s bonds rose to such a high level, that price of a CDS taken against Greece’s debt rose from $ .3 million (to insure a debt of $10 million) in January 2010 to $8.1 million (to insure a debt of $10 million) in November 2011. In brief, higher borrowing costs, widening budget deficits and problems in raising funds followed the credit rating downgrade.
What followed were actions from the European Union. The European Central Bank (ECB) announced that Greek bonds would be accepted as collateral even with a junk status, which helped increase confidence among investors and also helped relax bond yields temporarily. As expected, a series of bailouts from International Monetary Fund (IMF) and ECB also followed. Bailouts of f€45 billion and €110 billion In April-May 2010 were advance to Greece, followed by a write off of 50% of a part of Greek debt owed to private banks (which equal €100 billion) in October 2011. Meanwhile European Financial Stability Facility (EFSF) was also agreed upon on 9 May 2010, with a power to borrow up to €750 billion (which includes €250 billion from IMF and €60 billion from the budget of EU), in order to grant loans to fiscally weak economies to ensure stability across Europe. Greece also launched Austerity packages, to improve its fiscal situation. Despite all measures, Standard and Poor's downgraded Greece's sovereign debt rating to CCC, the lowest in the world, following the findings of a bilateral EU-IMF audit which called for further austerity measures.

A lot of suggestions have come up to improve Greece’s Fiscal situation, right from imposing tight austerity measures, to bringing tighter fiscal norms across the EU. Economists like Paul Krugman on the other hand argue the need to revive growth across Europe via investment expenditure. Many economists now also argue that Greece should engineer a ‘orderly default’, for the current situation will only increase future asset strains. They argue that an orderly default will allow Greece to leave the EU and re-launch Drachma at a debased rate. I refrain from giving my personal opinion on these suggestions.
In retrospect, I would just mention the need for debt-restructuring for Greece, without which it will continue to pile up its debt, now extrapolated to 180% of its GDP by 2012.


Investing in property - its achievable
at 7:40 AM